Search
Many of us have been captivated by two redheaded lasses from a young age. Both are sassy and inspiring—and continually find themselves in one adventure after another. Raggedy Ann and Little Orphan Annie are known worldwide through poetry, prose, cartoons, and the silver screen. It wasn’t until we came across a tome entitled An Old Sweetheart of Mine, with a beautiful cherubic Victorian girl on the cover, that we learned of the man who inspired these unforgettable characters.

The book, which we discovered on a cluttered shelf at an estate sale, has a worn green cover featuring a golden-etched character with curly locks, a round tranquil face, and that androgynous look so popular in Victorian-era depictions of children. The cover also bears the name of the author, James Whitcomb Riley, and inside, the publisher: Armstrong and Co. Lithography of Boston, 1891.

The mid-sized lithographed gift book, with its thick cardboard pages, vibrant illustrations, and indulgently lettered stanzas, tells the story of a man, who we imagine sitting by his fireplace as the embers turn to ash, remembering a true love, and so it begins …

As one who cons by evening o’er and album all alone,
And muses on the faces
of the friends that he has known,
So I turn the leaves of fancy
till, in shadowy design,
I find the smiling features
of an old sweetheart of mine … 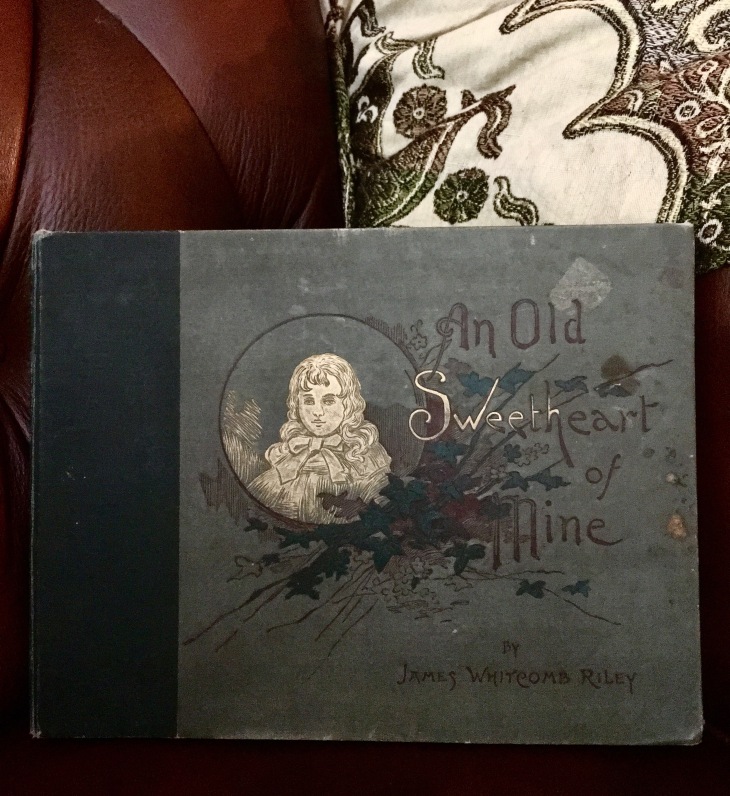 James Whitcomb Riley was born in Indiana in 1849. After years of writing and self-promotion Riley eventually came to be known as “The Hoosier Poet” and “The Children’s Poet,” as his tales tended to those of fancy and creative characters that appealed to children. He wrote in an unpretentious dialect often spoken by the working class in Indiana. His poem “Little Orphant Annie” (1885) was based on an orphan girl, Mary Alice “Allie” Smith, who lived briefly with Riley’s family. Originally known as Little Orphant Allie, a typo in the third edition renamed the poem as “Annie”—incidentally, “orphant” is not such a typo. In Riley’s time “orphant” was a perfectly acceptable spelling of “orphaned.”

Another of Riley’s poems, The Raggedy Man (1888) was based on a tramp who worked on his father’s farm. “He works fer Pa; An’ he’s the goodest man ever you saw!” The Raggedy Ann that we all know and love was an amalgamation of Riley’s “orphant” Annie and his “raggedy man,” fused together by the American writer Johnny Gruelle, (1880–1938), who created and patented Raggedy Ann in 1915. Little Orphan Annie as we know her today, made her mainstream debut in 1924, inspired by Riley’s character, but adapted and drawn by Harold Gray (1894-1968) as a comic strip in the New York Daily News.

But before Riley’s characters could evolve and influence other writers, Riley himself had to grow up and establish himself.

James Whitcomb Riley spent his childhood in Greenfield, Indiana, a rural suburb of Indianapolis. After trying out various means of employment, ranging from a painting apprenticeship to a bible salesman, he landed a job as a writer for the newspaper the Anderson Democrat in 1820. He began submitting poetry to various papers, and being highly ambitious, sent his works to poets of note, including Henry Wadsworth Longfellow. He received a reply from Longfellow saying that his poems showed promise and he used this as leverage to promote his poetry. However, Riley still was not receiving the recognition he thought he deserved, so he took dramatic measures, writing a poem and claiming it was a long lost poem by Edgar Allen Poe. For his efforts, Riley was summarily separated from employment at the Anderson Democrat

Riley’s “big break,” so to speak, came in 1878. While accompanying Indiana Governor James D. Williams at a speaking event, Riley had the opportunity to recite his poem A Childhood Home of Long Ago. The reading catapulted him to celebrity status—and he started making the rounds as a touring performer, staging shows, and reciting his poetry for large audiences. He was a presence—and by the late 1880s he was a legitimate player in the poetry scene, both nationally and internationally. He was, as the kids say these days, making bank on the tour circuit. In time, Riley amassed considerable wealth, despite a persistent drinking problem, poorly negotiating his contracts, and even bailing on a poetry tour by sneaking out in the middle of the night.

But prior to his tabloid-level prominence, Riley penned the poem in the lithographed giftbook we acquired. Our first edition was published in 1890 and the book focuses on a theme that is somewhat whimsical, yet more mature than many of his soon-to-be-popular pieces.

An Old Sweetheart of Mine recounts the tale of a man advanced in age, reminiscing about his childhood love. With sweet imagery and words of longing, Riley evokes a heartfelt nostalgia that fuels his vivid remembrances. Within the conclusion of these sentimental musings—**Spoiler Alert**— it is revealed that the narrator was fortunate enough to marry his childhood sweetheart!

But-ah! my dream is broken
by a step upon the stair,
And the door is softly opened, and
my WIFE is standing there!
Yet with eagerness and rapture
all my visions I resign
To greet the living presence
of that old sweetheart
of mine.

Could the narrator really be James Whitcomb Riley? Or is this a character that Riley only wished he could be? Although he writes of love in ways that reek of experience, Riley never married. So who was this sweetheart of his?

Scholars think the title sweetheart might have been a young lady by the name of Adda Rowell. Adda met James when she was just 16, many years before his rise to fame as “The Hoosier Poet.” In a 1927 newspaper article from The Hancock Democrat, Adda Rowell’s daughter, Barbara Schubert, recounted her mother’s tale of her relationship with Riley. It turns out Adda was very much in love with James, who was 19 when they met in 1869, and working at the previously mentioned painting apprenticeship. James and Adda had adorable pet names for each other; she called him “Jeems” and she was his “Airy Fairy Lillian.” Schubert described her mother as a “… dainty, dark-eyed French type with black hair that reached almost to the floor,” and even though they got engaged, Adda was secretly nervous about her beau’s wild ways. And fearful that he would never settle down or make something of himself.

It was very much a summer romance.

In the fall of that same year, Adda’s family left Greenfield, having only stopped in Indiana en route to the northwest. They had arrived in the spring and were gone before winter. And it was a good thing perhaps—because Adda’s family had the same misgivings about Riley’s character and future. And thus, their romance ended. They broke off their engagement and the Rowell family moved on. But James never forgot, and according to her daughter, neither did Adda. Adda ended up marrying another man who turned out to embody all her misgivings and concerns about James. Although her marriage was troubled and sad, Adda never returned to Indiana to find her first love.

And James went on without Adda. But contrary to the Rowell family’s expectations, he really did achieve the fame that he always wanted—yet despite his success and the adoration of an entire nation, An Old Sweetheart of Mine reveals an inner longing for a love that would never be.

When Riley died in 1916, he was an alcoholic of epic proportions and plagued by a slew of maladies including paralysis, Bells Palsy, and partial deafness. A nationally beloved celebrity, Riley was mourned en masse. President Woodrow Wilson himself wrote a sympathy letter to the family and the then-governor of Indiana, Samuel M. Ralston, laid Riley’s body in state in Indianapolis, where it was visited by more than 35,000 people. To this day, every October, in celebration of his birth month, Greenfield, Indiana hosts a festival in honor of James Whitcomb Riley featuring beauty pageants, a children’s flower parade, marching bands, craft vendors, and an outpouring of public fanfare.

His home for the last 23 years of his life, 528 Lockerbie Street, Indianapolis, is now the James Whitcomb Riley  Museum House, preserving the many treasures of this charming poet.

James Whitcomb Riley’s imagination and legacy will endure for generations through Raggedy Ann, Raggedy Andy, and Little Orphan Annie—even if most people (outside of Indiana!) don’t know the name of the man whose writing inspired the iconic characters. And although our beautiful, first-edition of An Old Sweetheart of Mine had been tucked away and abandoned on a crowded shelf at a dusty estate sale, when we first opened the long-neglected book and read the scrolling words, it was as if James’ love for Adda was somehow revived.

However James Whitcomb Riley is commemorated in his home state and in literary history, thanks to this touching treasure, we like to think of him as a romantic who fondly remembered his teenage romance and was deeply inspired by the thought of his first true love—and a poetic evening in front of a fireplace that could have been, but never was.

Researched and written by Ladi Iya. Ladi is a writer, reader, coach, and the executive producer and sole proprietor of Ladi Land.

Click here to read the full text of An Old Sweetheart of Mine.