A breast, a volcano, and a vellum leaf walk into a bar in Catania, Sicily.

It’s February 5, 1521. Around dusk, things get a bit rowdy, so the tavern keeper tells the trio they are no longer welcome. The volcano heads home. But the breast and the vellum leaf continue to drink. The tavern keeper picks up the breast and tosses it out the door. But no matter how hard he tries—he can’t move the vellum leaf—even though it should weigh next to nothing. Finally he gives up and looks over at a Benedictine monk.

“I don’t understand,” the tavern keeper complains. “No matter how hard I try, I can’t pick up that vellum leaf!” The monk nods his head. “It’s not your fault,” he says as he finishes his ale. “I just wrote that leaf today. And we all know how hard it is to turn over a new leaf.”

Volcanoes weren’t allowed to drink at taverns in the 1500s. And even back then, breasts usually traveled in pairs. But most importantly, a monk probably wouldn’t be in a tavern in Catania on February 5—the feast day of the city’s patroness, St. Agatha.

But who is St. Agatha? And what’s up with that breast and the volcano?

When we found this $20 vellum leaf at an estate sale, we knew nothing about St. Agatha. After bringing it home, removing the frame, and clumsily translating the verse by channeling Fr. Kelly, my high school Latin teacher, we made the connection to St. Agatha.

The front of the leaf is the second part of a sentence that asks for God’s mercy and assistance in overcoming torturous butchers. If you have a hard time reading the calligraphy, it might be because “J” and “I” look the same. “V” and “U” also look the same—as do “S” and “F”. And that illuminated vowel on the bottom stave? That’s an “E”, not an “A.” Obviously. Last but not least, the letters are spaced out according to the rhythm of the music. Not natural breaks between the words.

Regardless, thanks to an amazing online archive of medieval manuscripts, we determined that this leaf is most likely an excised page from an antiphonary of choral chants. The five-line staves indicate it was probably produced at a scriptorium in Spain. Our best bet is that it’s about 500 years old. This page is from antiphons recited on the Feast Day of St. Agatha.

According to legend, Agatha was the daughter of a wealthy family in Sicily around 250 AD. An avowed virgin and Christian, she refused to marry and rebuked many suitors, including Quintianus, a Roman prefect. By all accounts, Quintianus was really into Agatha. I like to think he put a lot of thought into wooing her. Should he bring flowers? Write a poem? Spend some quality time with her and get to know her? Maybe just accept the friend zone and find someone else?

No. Quintianus had an even better idea. 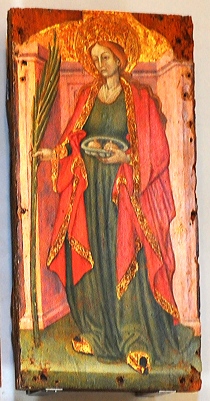 Arrest her and torture her. And oh yah—cut off her breasts.

In some versions of the story, Agatha is tortured on the rack and her naked body is rolled over sharp stones and hot coals. Another tradition depicts dragons breathing fire at her feet. At some point St. Peter appears to heal Agatha. But Quintianus is not a quitter. The torture continues until her jailers cut off her breasts.

But even cutting off her breasts didn’t kill Agatha. So Quintianus decided to burn her alive.

Well, the Christians of Catania were appalled. They loved Agatha. In fact, all of early Christianity fell in love with Agatha when they heard about her piety and bizarrely sexualized martyrdom. Agatha was venerated as a virgin martyr and became one of only seven female saints celebrated in the “Divine Office” of the Catholic church.

Which is why her story appears in Medieval antiphonaries such as the one that originally contained this vellum leaf. And just like this rando vellum leaf has survived through the centuries and hasn’t faded (well maybe a little bit here and there)—Catania’s love for Agatha hasn’t faded.

Each year, the city of Catania hosts an extravagant festival for St. Agatha.

According to Italy Magazine, the three-day fete culminates when “a statue of Saint Agatha holding her relics is placed on a 40,000 pound silver fercolo, or carriage, and is carried around the city by devotees until it is returned to the Cathedral late at night, or, sometimes, even at dawn.” The festival ends on February 5, Agatha’s feast day, with a mass and evening fireworks. Because fireworks

So back to the joke. We have the feast day, the vellum leaf, and the breast. But why did the volcano walk into the bar?

It comes down to miracles. All top-notch saints intervene on behalf of the faithful who honor them. Agatha is no exception.

Exactly one year after Agatha’s martyrdom, an eruption of nearby Mount Etna threatened to destroy Catania. Catanians prayed to Agatha to intervene, then fended off the approaching lava with her veil—a symbol of her virginity. Since then, Agatha has served as the patron saint of protection against volcanoes and fires.

In addition to natural disasters, St. Agatha’s diverse portfolio of patronages includes people with breast cancer, wet nurses, regular (dry?) nurses, bell makers, and bread.  You can form your own theories about those last two.