When I found a vintage Pillsbury Doughboy pancake mold at Good Will (with its original shipping package and typed instructions!), it seemed like a timely discovery. Not only was I excited to try it out since Pancake Day is fast approaching, but I was also inspired to write an article about the fascinating history of pancakes. But for the good or the bad, the story of Septuagesima Sunday sidetracked me, and my delicious article about pancakes will have to wait.

Septuagesima Sunday marks the ninth Sunday before Easter and the beginning of Shrovetide, a time of preparation for Lent. As such, Septuagesima traditionally marked the start of the carnival season, which we all know culminates in the best day of the year—Shrove Tuesday, aka, Pancake Day! 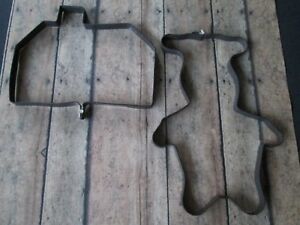 But for me, the most interesting aspect of Septuagesima Sunday, even more so than pancakes, is that on this day, the church “locked away” the word Alleluia, and it was not used in the liturgy again until Easter Sunday. In fact, the concept of locking away the word Alleluia from Septuagesima Sunday until Easter Sunday often manifested itself in a very concrete way. In certain regions, a physical representation  of the Alleluia was quite literally buried in the ground until it was dug up, or resurrected, at the Easter vigil.

This idea of “locking away” or “burying”  a word for 63 days days intrigued me, so I dived deeper into the history, etymology, and usage of the word “Alleluia.”

“Alleluia” is the Latinized version of the Hebrew compound word הללויה, which is, הללו (hallelu) + יה (yah). Roughly transliterating as “Praise god,” the first construction means “to praise or sing of,” while the second signifies the Tetragrammaton, the unspeakable name of god. So, starting on Septuagesima Sunday and throughout Shrovetide and Lent, that which is unspeakable is doubly unspeakable. The word “Alleluia,” with the sacred Tetragrammaton locked away within its spelling, is further locked away so that it can eventually be released and rendered even more powerful when it is once again uttered and sung on Easter Sunday.

This is pretty interesting when you think about the construct of language and words.

In our modern world, words are seen as symbols, arbitrary signifiers whose meaning and agency are derived only from context and cultural consent. A chair is called a chair because we all agree to associate that word/label with a piece of furniture upon which a person sits. However, as a society, we can consent to re-naming that object, without also redefining the attributes that are inherent to it. In essence, we all partake in a socio-linguistic contract whereby words are symbols with no existential connection to those things and ideals they represent.

For example, if we all agree to delete the word ‘chair’ from our lexicon and henceforth refer to those things formerly classified as chairs as, let’s say, “squeebobs,” modern linguistic theory espouses that the chairs themselves, the actual objects and their purpose, would not change. The qualities and existential data points that were formerly associated with “chairs” would simply transfer to the new label—and we would neatly push our squeebobs under the table, shop at LazyBoy squeebob shops, and lounge in lawn squeebobs to watch the sunset. As Shakespeare wrote, “What’s in a name? That which we call a rose, by any other name would smell as sweet.”

When you look at more abstract nouns/names/words such as freedom, justice, and love, the paradigm becomes a bit more complicated. When a society uses words on paper to define a black man as three-fifths of a person, and we broadly call that just—have we changed the very essence of justice? If a society such as Ancient Greece shelters and justifies the practice of abandoning an unwanted child in the wilderness under the auspices of “humane”—have we not only assigned that action a modifier, but also modified the very essence of what it means to be humane, thus redefining humanity?

If ancient and medieval people truly believed that locking away a word such as “Alleluia” and not using it for 63 days could render it more potent and powerful upon its eventual release, what else did they believe that might teach us to better appreciate the phenomes that we string together like pearls into words?

To learn more, we can first look to the Hebrew. The biblical Hebrew word for “word” (so meta!) is מילה or “devar,” and in that usage, roughly equates to the Greek word “logos.” But in Hebrew, that signifier means much more. “Devar” can also mean “deed or thing.” So in the ancient Hebrew culture, words were not necessarily divorced from those things that they named. A word wasn’t “just a word.” It had direct correlation and agency associated with it. The spoken or written word was seen as an action, a contract, even a—wait for it—covenant.

Hebrew words are also endowed with deeper meanings as each letter in a word is associated with a numeric value and a lexiconical value unto itself, providing the language with an ancient hypertext of sorts. For example, the letters in מילה or “devar,” are dallet, vet, and reish. The letter “dallet” means door. “Vet” means tent or house. And “reish” means container—but not a physical container. Rather, reish is that which contains the very ebb and flow of life, energy, and knowledge. So embedded within the word מילה or “devar,” is the phrase “the door to the house of knowledge/life”—a pretty apt definition of words and language. Coincidence? Perhaps. But then again …

Even “logos” in the Ancient Greek was contextualized to equate words with something much more than the mere act of labeling. Early Christianity recognized Jesus as “the word” made flesh (John 1:14). Here, logos also has an early hypertextual quality to it, as most scholars agree that logos refers not only to words written on paper or uttered aloud, but rather, the entirety of a message, the connotations and suggestions that accompany written or spoken words.

In ancient Egypt, heiroglyphs for certain words or concepts were literally “broken” with spaces inserted within certain glyphs to ensure that they weren’t empowered to take form. In Rome, the senate could impose sanctions against the commemoration of a person, removing their written name from public discourse and therefore history. As recently as the twentieth century, Josef Stalin had historical texts altered to delete the names of his enemies. It seems, that somewhere deep within the human psyche, words do have intrinsic value and meaning—and that the Adamic act of naming and uttering can be God-like in its own right.

But back to Alleluia and modernity.

In linguistics, we talk about “speech acts” and that in “saying” something, we often are simultaneously “doing” something. Simple and explicit examples of this theory include promising and commanding. By uttering the words “I promise,” a person is also taking the action of promising, unlike the sentence, “I run.” While “I run” implies that the speaker does indeed run, the utterance itself is not the act of running. Another common example can be found in a judge’s invective, “I sentence you” or “I condemn you.” These speech acts are the very performance of the sentencing or the condemnation. This is quite different from the statement “I draw pictures,” as the utterance of this statement does not result in a picture itself. Though to be honest, that would be pretty darn cool.

Another example might be, “I name.” In saying, “I name you Squeebob,” the speaker is actually performing that act, not just referencing it. And can you guess what the Old Testament readings at Matins for the week of Septuagesima are? The story of the creation of the earth, including Adam’s acts of naming all the animals.

And that’s what brings me back to Alleluia. Is Alleluia a speech act?

Is chanting this word over and over again an act unto itself, or merely a statement of intent? Does the repeated intonation of this singular word transcend the arbitrary fumblings of the human tongue and invoke an actual action? And what happens when we lock away or prohibit that utterance for 63 days then resurrect it agin on Easter Sunday?

Just for a moment, imagine a medieval gothic cathedral, architecturally designed to amplify, echo, and imbue sounds with mathematically specific vibrations. Each day, since Easter, that church has been filled with the chanting and singing of this word, alleluia. At the same times every day, the word “alleluia” has methodically and insistently reverberated not only throughout this cathedral, but also thousands of other churches throughout the world. A world with out the distractions of electricity, mass media, and mass communication. A smoky, dusty, and immensely quieter and darker world. For 302 days, the Alleluia has been extolled at the same times each day throughout an intricate system of massive buildings and tiny churches.

And then it stops.

The word and the song are locked away for 63 days. Not just the sound, but the action of the praise. It’s like a re-set. The rhythms and vibrations of a complex system of churches that spans all of Europe and beyond, is changed for 63 days—then reactivated in unison on Easter Sunday.

Our article on the history of pancakes will follow in a couple weeks.